Feedlines at the base of the tower. The repeater feedlines enter at the upper left, and cross diagonally toward the bottom. This view is looking down into the very bottom of the tower.

You will recall from a previous post that this antenna has two separate feeds, travelling side by side down the tower and into the transmitter room. One feed is for the batwings that face N-S, the other is for the E-W batwings. If you feed just one section, you get a figure-8 pattern. If you feed both sections, but with a 90 degree lag on one side, you get an omnidirectional pattern. Other variations of the feed phasing produce different patterns, which is beyond the scope of this discussion. 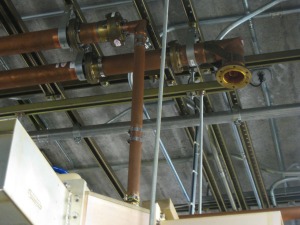 Inside the transmitter room, the two batwing feedlines. It was partially disassembled in 2009 when the DTV waveguide switch was installed (visible at bottom of picture).

I’m not a hard-core RF design engineer, so I don’t know too much about the original power splitter used to feed this antenna during its years in TV broadcast service. Unfortunately, that part of the RF system was removed to make room for the DTV upgrades that took place in 2009, and it was hauled away for scrap. It would have been interesting to inspect it, and even possibly use it. I’m guessing some modification would have been required, since it was likely built specifically for TV channel 3 (60-66 MHz). Alas, all that was left was two feedline stubs. This left me with three technical issues to solve: 1) How do you split the power between sections? 2) How do you feed one section with a 90 degree lag? 3) How do you attach feedline to those giant 3-1/8″ copper lines?

You can’t just use a “TEE” connector and run the two antenna feeds in parallel. Two 50 ohm feeds in parallel would be 25 ohms. But if your two feeds were somehow 100 ohms each, then you COULD run them in parallel and get a 50 ohm common feed point. It turns out that the Wilkinson power divider does exactly that (read more about it here). The impedance transformer is simply a 1/4 wavelength section of 75 ohm cable (the actual math is closer to 72 ohms, but 75 ohm cable is close enough). Place one of these impedance transformers on each of the two legs, and you can connect them in parallel to present a 50 ohm load to the transmitter (port 1 in the diagram). If the impedances of your source and loads are accurate, and the transforming section of 75 ohm cable is accurately cut, the losses should be very low.  It will also work in reverse, to combine the received signals. 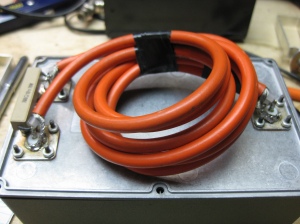 Inside my homebrew Wilkinson power divider

My attempt at building a Wilkinson power divider is pictured. The connectors, cable and resistor were all scavanged or donated, but I actually had to buy the box (the first money actually spent on this project!). The 75 ohm cable is Belden 8281, often used years ago in TV facilities for video signals. It is a rather stiff and unwieldy cable, with two braided shields of tinned copper and a very hard plastic dielectric. It’s the best 75 ohm coax I could think of that was still small enough to fit in a reasonable size enclosure. The fact that I had some nice scraps sitting around was a big plus. I just coiled it up, taped the coil together to hold it still, and soldered the ends to the connectors. The only other part is the resistor, which exists to balance the port isolation, and to dissipate power that might result from impedance mismatches on one or more legs of the circuit.

Now, assuming that the antenna’s feedlines are the same length, all I would need to do is connect two jumpers from the power divider to the rigid copper feedline, with one jumper 90 degrees longer than the other. Ninety degrees is the same as one-quarter wavelength, and the formula for metric length of 1/4 wavelength is: 75/F*V, where F is the frequency in MHz, and V is the velocity factor of the cable in decimal. This gives you the length of the cable in meters. For example, if the frequency of interest is 53.17 MHz, and the cable velocity is 80%, that is 75/53.17*.8, or 1.128m (1128mm).

This is one case where the exact length of the jumper cables isn’t significant in the way they are on a duplexer; they can be any arbitrary length, as long as one (doesn’t matter which) is exactly 1/4 wavelength longer than the other. So, I just estimated how long I’d want the short one to be, and made the other 1/4 wavelength longer. Once again, the junkbox came in handy, with pieces of Andrews 1/4″ Superflex Heliax, complete with N connectors that could easily be reattached after cutting the cable. The picture shows the final result, with the power divider mounted next to the feedlines, and the 90 degree phasing line jumpers between the divider and the feedlines. (The TYPE of jumper cable used here IS very important; we’ll talk about that in a future post.)

Connecting To The Big Feedline

So, where did I get the adapters that convert the 3-1/8″ feedline down to an N connector? You can buy these adapters from several sources, such as RF Parts, Microwave Filter Co., Dielectric, etc., but they are PRICEY, at least $750 each. It is NOT something you’d expect to find on eBay on an average weekend. However, once again I lucked out and was able to obtain a long-term loan of the exact adapters I needed! With the power divider described earlier, this finally gives us a single 50 ohm N connector point, and the repeater antenna system is DONE without ever touching the tower!

That’s nice, you say, but does it WORK? There is one way to find out…coming up next.

I'm a lifelong geek, interested in anything electronic, but especially ham radio, radio and TV broadcasting, and computers. Employed as a television engineer for several Syracuse, NY TV stations.
View all posts by kd2sl →
This entry was posted in Uncategorized. Bookmark the permalink.

1 Response to Feeding The Antenna